The revised 1851 Indiana Constitution. Courtesy of the Indiana Historical Society. 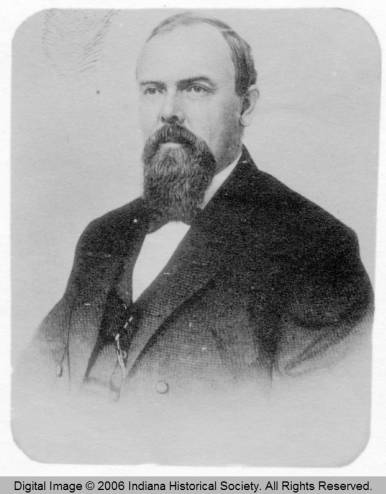 Indiana’s war-time Governor. His policies led to a fierce internal civil war with the General Assembly. Courtesy of the Indiana Historical Society.

The New State Constitution of 1851

After years of political and budgetary turmoil, the Indiana General Assembly and the general public agreed that it was time for an improved state constitution. The failures of the Mammoth Internal Improvements Act in the 1830s and 40s precipitated a need for more safeguards against “special legislation,” or local legislation that served special interests.[1] The election of state delegates, many from within the General Assembly, ensured that state debt would be contained and allowed for only special defense purposes. For example, delegate Schulyer Colfax (future vice-president under Ulysses S. Grant) wanted the language on debt to be so clear that, “no more State debt shall hereafter be created upon any pretext whatever. . .”[2] The limitations enacted against the General Assembly created a rigid political system that neglected the promise of debt remuneration for at least three decades, especially during the disastrous effects of the Civil War.

The delegates, however, did create more effective organizational tools for the legislature. The General Assembly was provided with biennial sessions with sixty-one days of legislative time, and a two-year term for representatives and a four-year term for senators were also established. Furthermore, the House and Senate were limited to only 100 and 50 members, respectively. These same provisions continue today, with the notable exception that the General Assembly now meets every year. The delegates also made some social progress, instituting a stronger push for public schools and easier access to citizenship for immigrants.[3] Yet, there was one particular provision of the new state constitution that created widespread animosity up through the Civil War.

Indiana and Race: The Antebellum Years

When the state constitution was ratified by the public in February 1851, it institutionalized its own version of racism. Article 13 stated that, “No negro or mulatto shall come into or settle in the State, after the adoption of this Constitution.”[4] Even though Indiana was a Free State, a strong antagonism towards African-Americans lingered. As historian David G. Vanderstel noted, Article 13, “demonstrated the strength of the exclusion and colonization movements, which sought to remove blacks to Africa.”[5] Voting rights for the already 11,000 African-American citizens was also prohibited by the 1851 constitution, and African-American marriages were also left unrecognized.[6] Many of these egregious policies were slowly reversed after the Civil War, but discrimination and legal obfuscations continued well into the mid twentieth century.

Indiana and the Civil War

The Civil War permanently altered the course of the United States, and Indiana’s unique role in the conflict underscored these drastic changes. Indiana ranked second among the Union in the amount of troops, just over 197,000, and suffered over 25,000 casualties.[7] While personal sacrifices occurred on the battlefield, an internal civil war erupted between the Governor and the Indiana General Assembly. The eye of this political hurricane was Governor Oliver P. Morton, often cited as Indiana’s most influential Governor. Elected as Lieutenant Governor under Henry Smith Lane, Morton assumed the Governorship after Lane went the U.S. Senate.[8] From 1861 to 1867, Morton made his presence felt throughout the state, often in controversial ways.

Morton’s leadership exacerbated the political divisions within the Indiana General Assembly. Some Democratic legislators scrambled to remain relevant, supporting the aims of the Union but not the executive power grabs of Morton or President Lincoln. Others were fierce “Peace Democrats,” which the Morton administration targeted as “Copperheads” and “traitors.”[9] The same divide pervaded the Republicans as well, but their leadership often bowed to Morton’s forceful demands. But by 1862, the barrage of military failures and Lincoln’s Emancipation Proclamation had angered the Indiana public enough to ensure a Democratic sweep in the mid-term elections.

Once the Democrats had control of the state’s legislature and finances, the legislative progress of Indiana stagnated for over two years. When the General Assembly tried to pass a law that truncated the Governor’s war-time powers, the Republicans, “bolted, fleeing Indianapolis in order not to be forced to provide a legislative quorum.”[10] The finances of the state become so dire that Governor Morton, along with a consortium of bankers united by fellow Hoosier James Lanier, financed the state government by fiat, without legislative approval. At one point, Morton doled out funds from a safe in his office, virtually circumventing the General Assembly.[11] By 1864, Morton was essentially a dictator, but the cause of the Union, at least in his perspective, was larger than the need of constant legislative approval. The Indiana public largely agreed. The 1864 elections swept a wave of Republicans into the legislature, reelected Morton, and helped calm some of the storm that was Indiana’s government.

Once the war was over, Morton finished out his term and became a United States Senator. The Indiana General Assembly, by 1869, was flooded with Radical Republicans, ensuring that at least some of Reconstruction’s policies were carried out. Nonetheless, the Civil War divided the Hoosier state in ways not felt since, and Morton’s tempestuous relationship with the General Assembly certainly motivated those divisions.